The Scoreboard in our club and most clubs is a little crazy looking for the general public to decipher. Check out this video to get a brief explanation of how to figure out this uniquely Canadian way of building a scoreboard. 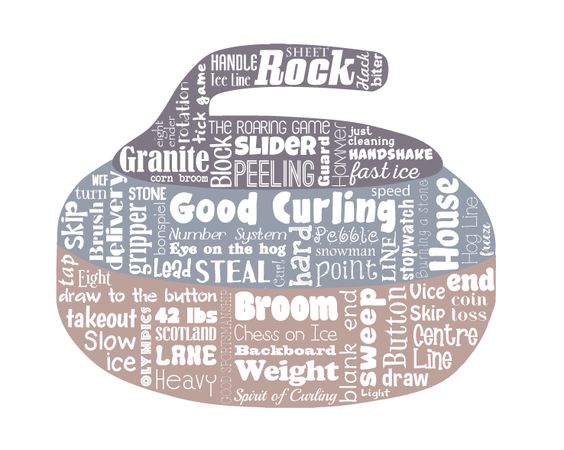 Here is a pretty comprehensive list of words you might hear on the rink as you curl. Use them and improve your curling understanding.

The Skip asked me to give him Board Weight for the double raise takeout where the shooter can still be a biter. I said what the [email protected]#$? I looked it up. and still thought he was crazy but I made the shot.

A registered, non-playing member of the team who is eligible to substitute for one of the competing players.

The end of the sheet to which the first stone of a game is delivered.

Material (e.g. foam or wood) placed at the end (perimeter) of each sheet of ice.

The speed given to a stone at delivery so that it will just reach the back of the house.

A line at the back of the house, extending across the width of the sheet, which is parallel to and located 1.829 m. (6 ft.) from each tee line.

Back of the House

The area within the house that lies between the tee line and the back line.

A stone that just touches the outer edge of the outside circle of the house.

An end resulting in no score for either team.

A curling competition or tournament.

A device used by players to sweep/clean the ice in front of a moving stone.

The small circle at the centre of the house.

A stone in motion touched by a player or any part of a players equipment.

The line dividing the playing surface down the middle. It joins the midpoints of the tee lines and extends 3.658 m. (12 ft.) beyond the centre of each tee line.

Any number of teams playing games to determine a winner.

A shot that curls behind another stone.

Any stone in or touching the house and is considered a potential point.

A line indicating where the sweepers from the non-delivering team are allowed to stand in order to ensure that an umpire can view the hog line and to prevent distraction of a delivering player.

The curved path of a stone as it travels down the sheet of ice.

The end of the sheet from which the stones are being delivered.

The team that is currently in control of the playing area, and scheduled to deliver the next stone.

The motion a player makes when playing a curling stone.

A device which attaches to the handle of the stone and acts as an extension of the arm/hand during the delivery process.

A stationary stone that has been moved to a new location.

(e.g. foam or wood) used to separate the sheets of curling ice.

A stone that removes two of the opponents stones from play.

A stone which stops inside or in front of the house.

A stone that bumps another stone into the house.

The calculation made by taking the average distance of the Last Stone Draws (LSD), excluding the least favourable LSD, and used, if required, to assist in the determination of ranking after a round robin.

The momentum required for a delivered stone to reach the house at the playing end.

A device that indicated if a stone was released by a player before the stone reached the hog line at the delivering end.

A portion of a curling game that is completed when each team has thrown eight stones and/or the score has been decided.

Anything that is worn or carried by a player.

An additional end played to break a tie at the end of regulation play.

An occurrence not caused by either team.

The first curler on a team to deliver two stones in each end.

The fourth curler on a team to deliver two stones in each end.

The area at the playing end, between the hog line and the tee line, but excluding the house.

A form of a draw shot that stops directly up against another stone.

The momentum required for a delivered stone to reach the front part of the house at the playing end.

Two teams playing a specified number of ends to determine a winner.

A stone that is placed in a position so that it may protect another stone.

The foot-hold at each end of the ice which is used by a player to start the delivery of a curling stone.

The momentum required for a delivered stone to reach the hack at the playing end.

The part of a curling stone that a player grips in order to deliver.

A term used to describe the stone which will be the last stone delivered in that end.

A stone delivered with a greater speed than necessary.

A take-out. Removal of a stone from the playing area by hitting it with another stone.

A stone that knocks an opponent's stone out of play, and then rolls to another position in play.

A line extending across the width of the sheet that is parallel to and located 6.40 m. (21 ft.) from each tee line.

A stone that is removed from play for the end, because it was not released before it reached the hog line at the delivering end.

A stone that is removed from play for the end, because after being delivered, it did not come to rest completely beyond the inside edge of the hog line at the playing end.

The end of the sheet from which the first stone of a game is delivered.

The area within the concentric circles at each end of the sheet.

A command which instructs players to sweep harder.

The complete ice area that is within the perimeters of the curling sheet.

In the Process of Delivery

The sequence of play that begins when the delivering player is positioned in the hack and concludes when the stone is released.

The rotation applied to the handle of a stone by a right handed curler which causes the stone to rotate in a clockwise manner.

A contest conducted at the conclusion of a teams pre-game practice in which each team delivers a single stone to the tee at the home end. The resulting distance is measured and used to determine which team has the choice of delivering the first or second stone in the first end.

The first player on a team to deliver two stones in each end.

The status of a team that has a combined total of stones left to be delivered and/or remaining in play that is less than the number needed to produce either a tie or a win.

An instrument that determines which stone is closer to the centre of the house (Tee), or whether a stone is in the house.

A stone in motion either from a delivery or from being struck by another stone.

Original Position of a Stone

The location on the ice where a stone rested prior to its being displaced.

The location of a stone that is not in play (e.g. one which has touched a side line, or crossed the back line).

The rotation applied to the handle of a stone by a right handed curler which causes the stone to rotate in a counter-clockwise manner.

The water droplets applied to a sheet of ice before commencing play. These droplets freeze, which then reduces the friction between the ice and the stones.

A shot designed to remove a guard.

The end of the sheet to which the stones are being delivered.

At the completion of an end, one is awarded to a team for each of its own stones located in or touching the house that is closer to the tee than any stone of the opposition.

An opening, or gap, between stones.

In Mixed Doubles games, the two stones that are placed in designated positions prior to the start of each end.

A type of draw which bumps forward another stone.

A delivered stone hits a stationary stone, which then starts to move and it hits a third stone out of play.

The sideways movement of a curling stone after it has struck a stationary stone.

A competition in which each team plays all the other teams.

The number of points received by a team in an end.

A team scores one point for each of its stones that is within the house and closer to the tee than any stone of the opposing team.

The second curler on a team to deliver two stones in each end.

The specific ice surface upon which a curling game is played.

At any time during an end, the stone closest to the tee.

A line placed at the side (perimeter) of each sheet of ice.

The player who directs play for the team.

Slippery material placed on the sole of the sliding shoe, which makes it easier to slide on the ice.

A stone in play which is not in motion.

Also known as a rock, a curling stone is made of granite and is delivered by the players in a curling game.

A stationary stone hit by another stone which causes it to move.

The action of moving a broom or brush back and forth in front of the path of a moving stone to clean or polish the ice surface.

The condition of the ice or stones causing the stones to have excessive curl.

Removal of a stone from the playing area by hitting it with another stone.

Four players competing together. A team may include a fifth player (to act as an alternate) and a coach.Mixed Doubles have one male and one female player, and may include a coach.

The exact centre of the house.

A line extending across the width of the sheet that passes through the centre of the house parallel to the hog line and backline.

The third curler on a team to deliver two stones in each end.

Stoppage of play called by a team or umpire.

Top of the House

The area within the house that lies between the hog line and the tee line.

The person(s) responsible for the conduct of the game in accordance with the rules.

(Mate or Acting Skip) The player who directs play for the team when it is the Skip's turn to deliver,

The amount of force/speed given to the stone during the delivery.

Two lines that run from the hog line to the outermost edge of the nearest circle of the house.Wheelchair curlers are allowed to start their delivery with the stone placed between these lines.